In an apparent attempt to appeal to working class voters, earlier this week the Democratic Party released its new slogan for 2018,  “A Better Deal: Better Skills, Better Jobs, Better Wages.”  Of course, this slogan sounded very familiar to most. First, it is an extended version of a message Tim Kaine trotted out back in May. And then, of course, there is its striking similarity to Papa John’s slogan. Which led Twitter users to relentlessly mock the Democratic Party for its lack of originality and its inability to interpret the mood and the needs of the country.

What do we want? Better Jobs, Better Wages, Better Healthcare
How do we get it? Better Democrats!

But NOT "Better Ingredients" so I'll be sticking with Papa John's thank you very much https://t.co/ewenUZkZuK

And my personal favorite:

Let me say that I am a white rural voter, I have a graduate school education, and I am also the working poor and uninsured. I am not an anomaly in America today; however, judging by Marcotte’s article people like me are simply a thing that does not or cannot exist. In Marcotte’s opinion, the sheer nature of my white ruralness makes me “committed to culture war” and more interested in using the “Republican Party as a cudgel to beat up the people that threaten [me]” than I am in healthcare, jobs, and wages.

In fact, Marcotte argues that it doesn’t even matter what policies Democrats offer because people like me “aren’t really moved by policy”. We are considered disinclined to vote for Democrats because we perceive them “as snooty, educated, racially diverse city-dwellers.”  Marcotte further argues that Democrats should “give up” on people like me, “and instead put their resources towards organizing voters of color, as well as urban whites (particularly women), who embrace these cultural shifts, and try to increase turnout with those groups.”

So there you have it, using the language of the elitist, snooty, educated, city-dweller, Marcotte writes off tens of millions of Americans as not worthy of the Democratic Party’s time. Which makes a grubby little hick like me wonder, does Marcotte not understand that this is the very message the Democratic Party has been sending its voters in neglected rural areas for decades?

Unsurprisingly, Marcotte transposes the cause and the effect. It is because the Democratic Party abandoned rural working class voters that the GOP has been able to effectively use cultural issues to their advantage across the country. What’s worse, it has largely been strategic neglect. For example, in Whistling Past Dixie, political scientist Thomas F. Schaller encourages the Democratic party to completely concede the South to the Republicans, arguing:

If the Democrats can simultaneously expand and solidify their existing margins of control in the Northeast and Pacific Coast states…the Democrats can build a national majority with no help from the South in presidential elections and little help from southern votes elsewhere down the ballot.

While Marcotte believes the Democrat’s new slogan is intended to woo voters like me (i.e. dumb white hicks who hate Democrats for their Democraticness), it misses the point. Contrary to what Marcotte believes, no matter their race, rural voters don’t give a damn about political party slogans. When the country’s economy takes a nose dive, poor and working class voters are the first to feel it, and they are the last to recover from it. The only thing we give a damn about is policy, and policy is how you get us to the polls.

Right now there is one very obvious place to for the Democratic Party to start if it is interested in winning back the country, and that is Medicare For All. 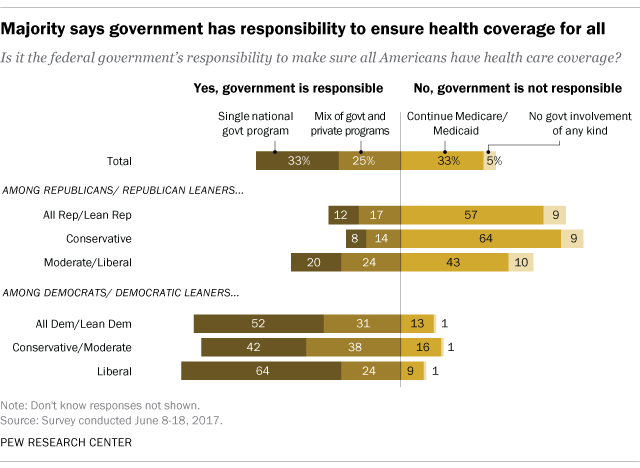 As noted by Sammy Kayes in, Medicare-For-All Can Unite the Left―and the American People:

Healthcare is one of the few issues that has the potential to quickly overcome political ideology. You won’t find many conservatives and neoliberals on their deathbed arguing about the joys of a healthcare free-market. Not any honest ones, at least.

Everyone wants healthcare. Nobody wants to lose it. And an issue that is traditionally “left-wing,” and which the entire left can agree on, is the issue of the day. This is our moment to build a people’s movement. Medicare-for-All is the strongest point around which to unite.

This rural voter agrees with Sammy.  Of course, Marcotte argues that racism is the driving force behind the white rural voter’s contempt toward ACA.  In her misguided opinion, the policy is “a secondary concern to the desire of angry white conservatives to exert or reassert their cultural dominance” and “the loathing of Obamacare: It was the “Obama” part, not the “care” part.”  This is, of course, batsh*t.  I happen to live in one of the 19 States that did not expand Medicaid, which has left millions without health care coverage, and millions more unable to afford their mandated healthcare coverage under ACA.

Papa John's full motto is actually "Better Ingredients, Better Pizza, Obamacare Is So Bad It Will Bankrupt Me"

While Marcotte and Schaller argue that abandoning voters in some of the poorest regions of the country to economically and socially regressive GOP policies is a winning recipe for the Democratic Party, clearly the last 10 years would indicate that they are absolutely wrong.  It’s really quite simple, if the Democratic Party actually wants to win, it might want to turn to voters rather than allowing overpriced political consultants to run their campaigns and relying on out-of-touch media elites and academics to forecast the mood of the country. Clearly, most of these individuals have proven to be abject failures in this regard.

Perhaps it isn’t obvious to Democrats yet, but their day of reckoning for decades of neglect came on Tuesday, November 8, 2016. And after months of weasel words, deflections, distractions, and the Democrat’s outright sabotage of California’s Single-Payer bill, support for the party has only further eroded. Unfortunately for establishment Democrats, progressives have witnessed enormous gains in advancing our agenda over the last year. In fact, just this weekend Senate Minority Leader Chuck Schumer announced that Democrats are now open to Single-Payer health care.

Of course, voters have no reason to put their full-faith behind the words of Democratic Party leadership. Nonetheless, the fact that they have changed their tune on the issue over the last few months indicates that progressive activism is working and Democrats are feeling threatened. So, on we fight, until we have replaced all Democrats who allow special interest groups and industry dictate Democratic policy in this country. There is no better place to start taking this country back than with the very people in those rural and rust belt regions that the Democratic Party abandoned 35 years ago.