“We want to talk about a country that has misbehaved for many many years – decades, actually – through numerous administrations.”

Finally, I thought. The President of the United States is publicly articulating both the impregnability and harm of the American military-industrial complex.

I wondered if his critique would take the high-ground and stick strictly to US policy, or if he would take the low ground and point out the depravity of his country; physically represented in its arrogant, obnoxious, overweight, legacy-kid-with-a-bad-haircut leader.

Oh, he was talking about North Korea … I see.

This week, President Trump threatened North Korea with “fire and fury like the world has never seen.”

Referencing President Truman, who in August, 1945 threatened Japan with “rain of ruin from the air, the like of which has never been seen on this earth,” was, perhaps, an appropriate way to celebrate the 72nd anniversary of the atomic bombings at Hiroshima and Nagasaki — still the only time in human history someone has made it “rain” nuclear “fire and fury.”

But really, the whole week was about the bombastic back and forth between Trump and North Korea.

North Korea responded to Trump’s “fury” by calling the threat a “load of nonsense,” and threatening to launch missiles at the waters surrounding Guam, a US territory, in order to “send a stern warning.”

Trump replied, “If he utters one threat in the form of an overt threat … or if he does anything in respect to Guam or anyplace else that’s an American territory or an American ally, he will truly regret it and he will regret it fast.”

I have spoken often in this space about the Gift of Trump; the idea that by continuing to pursue the policies of every President since Reagan (at least), but by doing so in a belligerent and inflammatory manner, Trump would draw attention to the holes in the structure of the American system.

Let’s just take a step back for a moment, shall we? This week, the President of the United States threatened a nuclear holocaust through Twitter.

It is hard for me to fathom being beaten over the head with the Gift of Trump any more overtly.

It seems an opportune time to discuss nuclear non-proliferation. Usually, the conversation centers around ‘dictators’ and ‘terrorists’ trying to acquire nuclear weapons. But what about the relative autonomy the President of the United States has over the world’s largest nuclear arsenal, and what happens when that President is someone like ‘The Donald?’

It might even seem the opportune time to discuss the merits of a system where the purpose of the United States military is to crusade around the world picking off smaller countries America doesn’t like.

When the W. Bush administration was at its warmongering peak, the stance of global governments towards modern American imperialism was somewhat split. 59 different countries contributed militarily to the War in Afghanistan, and 40 to the Iraq War. Certainly this included several smaller, less globally prominent countries such as Moldova, but it also included, in one or both of the excursions, countries like the UK, Germany, Canada, Australia, New Zealand, Spain, Turkey, Japan … heck, even RUSSIA got in on Afghanistan.

I wanted to put another country after Moldova. I felt like it should be a country of moderate size and importance whom I could tease by suggesting they were small and insignificant. Where are the people proud, yet sumptuous? I spent about half an hour looking through the coalition lists, but in the end I just couldn’t do that to Portugal!

On the diplomatic stage, international disagreement to Bush’s imperialism, for the most part, manifested itself in silence rather than opposition. Those countries who did openly oppose the American agenda –like France — were aggressively demonized within the US — remember ‘Freedom Fries?’

Now, however, there is very little acquiescence within global opinion on Trump’s imperialism.

All week, denunciations of his approach to North Korea poured forth.

“I consider an escalation of rhetoric the wrong answer.”

“I am convinced that a verbal escalation will not contribute to a resolution of the conflict.”

“At present, the relevant parties must maintain restraint and avoid words and deeds that would exacerbate the tension on the Korean peninsula.”

“It’s obviously in all our interests to make sure that nothing escalates. We are very strongly in support of the UN process.”

“Unfortunately, the rhetoric in Washington and Pyongyang is now starting to go over the top. We still hope and believe that common sense will prevail.”

Called on both sides “to prevent any escalation of tensions” that “undermines the preservation of international peace.”

“Committing to an aggressive response now – while encouraging all involved to avoid escalation – is not a position we want to take,”

In response to these comments and concerns, Trump goaded, “we don’t want to talk about progress.”

Turning up to 11 the traditional American political disdain for diplomacy which includes opinions contradictory to their own is kind of a theme of the Trump administration.

In addition to antagonism towards other world leaders in meetings, at events, on Twitter, Trump has proposed a one-third budget cut to the State department. His administration does not even currently have an ambassador to South Korea.

What can be seen in the words and actions of the global community is their embrace of the Gift of Trump.

When the W. Bush administration was at the height of its warmongering, it enjoyed almost universal support from the political establishment at home.

Trump is opposed by Democrats — which might seem obvious, until you remember that some of the most ironclad support for W’s neoconservatism, for the Iraq War, came from Democrats like Hillary Clinton, Chuck Schumer, and Dianne Feinstein.

He has also been critiqued by some Republicans, who turn their noses up at their own grotesquery laid bare.

Most interestingly though, he is now even, as seen this week, being publicly rebuked by some within his own cabinet.

As Trump held his freestyle rap battle with Kim Jong-un, Secretary of Defense James Mattis, the ‘Mad Dog,’ said, ““The tragedy of war is well enough known. It does not need another characterization beyond the fact that it would be catastrophic,” adding “[We are] gaining diplomatic results. And I want to stay right there right now.”

Secretary of State Rex Tillerson, cheeks burning red with embarrassment (or perhaps it was just hot), told the media, “I do not believe there is any imminent threat, in my own view. Americans should sleep well at night. I have no concerns about this particular rhetoric over the last few days.”

The Gift of Trump has allowed Democrats to, at least, talk tough — in 2003, a Democrat ‘talking tough’ meant Hillary Clinton delivering an impassioned defense of the Iraq War to Congress. It has given Republicans a chance at self-reflection, and it has even crept its way into the minds of some within the Trump administration.

Not yet completely determined, however, is how the Gift of Trump will fully effect the American public as a whole; how the angst created by this gift will be directed, or, diverted.

When, this week, violent clashes erupted between protesters over the removal of statues of confederate war heroes, I wondered, for a moment, if it was an issue of racial equality, or if it was just that more space was needed for statues of heroes from upcoming wars.

It speaks to the volatility of the week, of the time really — like the devil with his golden fiddle, the dark side of the gift — that the President of the United States threatening Venezuela with military intervention did not really make the news cycle; next to Americans beating each other bloody in the streets, and the President of the United States threatening a different country with nuclear intervention. Then again, neither did Venezuela’s position as home to the world’s largest known oil reserves, or North Korea’s reported trillions of dollars of untapped mineral wealth.

Really though, Venezuela is an appropriate metaphor.

Clearly, the country is suffering from some level of social unrest at the moment. Trump, in his own words, is suggesting military intervention because “the people are suffering and dying.”

What the Gift of Trump should make clear, is: globally, and when venturing to “Make America Great Again,” attempting to resolve social unrest, inequality, poverty, and injustice, with the military-industrial complex, with neoconservatism, with imperialism, is a failed method.

Quote of the Week: 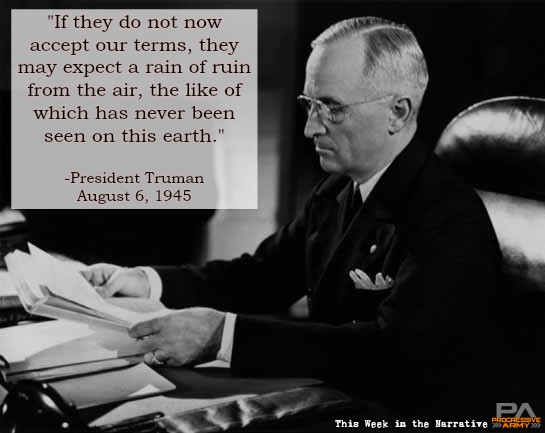 Read More This Week in the Narrative:

Week 38: The No Trans Dance

Week 34: Patience is Over

Nigel Clarke is a Writer for Progressive Army.